With more precise information about the forest, better decisions can be made. This is the opinion of Mats Nilsson, researcher at SLU (Swedish University of Agricultural Sciences), who works within Mistra Digital Forest to produce new maps with the help of laser data, including site indexes. The maps have been evaluated by the forest company Holmen.

– With the maps, we can see differences in stocks and get information about new areas, says Nils Lindgren at Holmen. 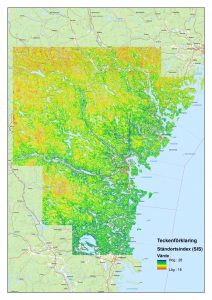 An important variable in forest planning is the site index, meaning the natural production capacity of the soil. Currently, forest owners go out into the field to measure and collect data about their forests – a most time-consuming task. The result is then combined with other factors such as latitude and altitude to produce a site index that gives the expected tree height when the forest is 100 years old.

– We have tried using data from laser scanning to produce growth maps that show the growth in height between the national laser scans and also so-called SIS maps that show site index, says Mats Nilsson, researcher at SLU and continues;

– We have also tried to improve the estimates of the site index. Among other things, we do this by taking into account that the national laser scan occurs at different times of the year, affecting the length of the growth period. So, we try to find models that take this into account.

Nils Lindgren at Holmen Skog has participated in evaluating the maps that SLU has produced and finds them to be “almost as good” as Holmen’s existing ones.

– With the maps we can see differences in the stands, for example a rocky outcrop, which we otherwise can’t see because Holmen’s land is divided into stand polygons without variation within each area. I also see that one potential use for the maps could be to get information about forest land where no-one has been before, for example new customers’ land, he says and adds:
– We have been calling for this for a long time and it is gratifying to see that these opportunities will be coming soon. 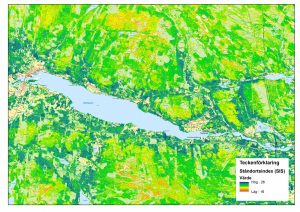 Another value of the new SIS maps that Nils Lindgren sees, is the ability to calculate thinning indices with better information. In order to know what has been thinned in a forest area, access to the site index is needed – and with SLU’s maps with more variation, the result will be more accurate.

– By thinning correctly, we ensure that the right tree remains in the forest and can continue to grow, he explains and says that in the spring of 2022, Holmen also plans to use the new maps to calculate the thinning index.

Mats Nilsson concludes by saying that work continues to improve the accuracy of the maps further. Hopefully, it will then be possible to offer the industry an even smarter product.

About the Work Package Forest Facts