In 2020, BillerudKorsnäs worked with Skogforsk on digital solutions related to marking, nature management considerations and landings – and the results of the projects show great potential both for more sustainable forestry with higher precision, and for better decision-making support for forest machine operators.

In recent years, the conditions for accurate satellite positioning in the forest have got better. The number of satellites has doubled and receivers have been improved.

Marking is currently done by setting up physical tapes, for example to mark boundaries, groves and places where extra care must be taken before felling. It is not only a time-consuming task but there is also the risk of tapes falling down.

– By replacing physical tapes with digital ones on the driver’s map, safety could be increased whilst also reducing planning cost. Using digital marking, the driver gets a warning when approaching sensitive objects, and the risk of making mistakes is reduced. In addition, it facilitates activities in less favourable conditions, such as in darkness and snow, where physical tapes can be difficult to see, says Lars Ohlin, IT manager for Forestry Planning IT-Systemsat BillerudKorsnäs. 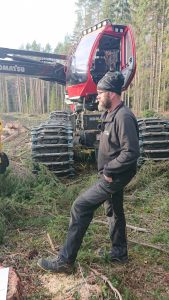 Niklas Elander drives the harvester in the pilot project at the forest contractor KSAB, and he is satisfied with the project.- Especially in the next step, when we get the result continuously on the screen – a countdown of the different types of special considerations as we work. Now I use a bit counter to keep track of how many tall stumps there should be, and here I’ll be leaving 60 of them. Photo: Björn Hannrup

Lars Ohlin, who has worked together with Björn Hannrup during the autumn of 2020, has let the forest company’s forest machine operators drive in three different areas with digital tapes – all with existing machines and equipment.

– All the drivers were very positive. They provided valuable input, for example about the distance at which they want to be warned, in order for them to feel confident, says Lars Ohlin.

GNSS positioning can also be used for digital nature conservation management. At present, there is no satisfactory follow-up system for nature conservation and the creation of tall stumps and trees of particular natural value. The driver has to keep track of these measures himself. But, with funding from the Skogssällskapet Foundation, Skogforsk has developed a model for following up nature conservation with the help of digital data sources – something that has also been tested by BillerudKorsnäs’ machine operators.

– At the push of a button when the tall stump is left standing, all the information is transferred to the production file directly. Then you know exactly how many stumps, the diameters, and the tree species that have been left – and where they are, Björn Hannrup explains.

So, when will digital marking, become a reality? Lars Ohlin believes that we will never be able to remove the physical tapes completely when we want to guard against damaging extra sensitive objects, but both he and Björn Hannrup believe that it will be possible to reduce the manual tapes as soon as within a couple of years. One important condition remains – reliable GNSS systems when harvesting.

In addition Björn Hannrup says, digitalisation is needed at all levels – from planners, to thinners and harvesters.

Decision-support for optimisation of landings within easy reach 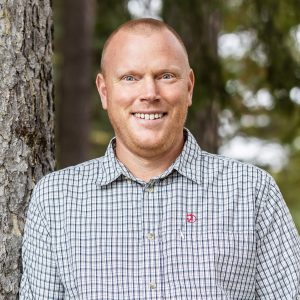 Using GNSS positioning to assist with optimising the landings, that is the place where the timber is collected for further transport, is another area that BillerudKorsnäs has worked on within Mistra Digital Forest.

– As a planner, you are often skilled at finding landings, but not always at finding the way out. The nearest road is not always the best option. For example, the optimal number of landings, distances for the forwarder, and the bearing capacity of the ground can be difficult to calculate on your own, says Johan Söderholm, who is Forestry Specialist and Business Developer within Planning at BillerudKorsnäs.

Shorter transport distances, less ground damage, and time savings for the planner are precisely the advantages that Johan Söderholm sees in the digital map systems that they are developing.

With these systems, which were tested in the autumn of 2020, planners could get a calculation and a suggested landing – support that they currently do not have when they are out in the area to be felled. 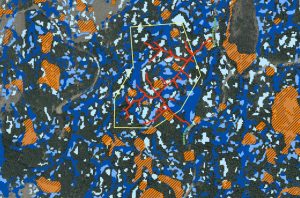 The picture shows possible landings and driving distances. In this case, the total forwarding distance would be 20 km shorter if two landings were used, instead of one. Photo: Skogforsk

– The proposal that the system provided for the planners was seen as a good starting point, but it wasn’t always possible to use it outright. However, they felt that it was helpful to have a foundation to start from, says Johan Söderholm.

The tests were carried out in areas that were already planned, or in felled areas. Johan Söderholm says that the next step is to test in completely unplanned areas. As decision-support, he believes that an implementation of the technology is really not that far away.

– Going forward, our challenge is to incorporate this into our existing systems, and to get all the available data into these calculations. This is something which we will continue to work on and, with the increasingly dense laser scanning of the future, there is great developmental potential, Johan Söderholm concludes.

GNSS and GPS – what’s the difference?

GNSS stands for Global Navigation Satellite System and refers to satellite positioning regardless of which satellite systems are used.

GPS stands for Global Positioning System and refers to positioning with the American GPS system, and was initially the only system that was available.

According to Swedish law, forest owners are obliged to comply with the so-called Swedish Forest Care Act. The law states that the forest is a renewable resource that must be managed so that it provides a good return, sustainably. At the same time, the forest owner must take the natural environment into account, along with the cultural environment, the reindeer herding industry and other interests.

A tall stump is a tree that is cut at a height of a few meters, by the harvester during felling. Recently dead, sunlit, standing dead wood is created in this way. This is something that is unusual in the production forest, and it can be utilised by many species of wood-boring insects and fungi. Cutting tall stumps is a very particular Swedish nature conservation measure, and that a certain number of these tall stumps have to be created during final felling has been enshrined in the certification standards for many years (later also during thinning).