Hem / News / Learning through demonstration – it’s possible, even for a crane in forestry

Learning through demonstration – it’s possible, even for a crane in forestry

Is it possible to teach a crane on a forestry machine to perform the same job more accurately, and in less time than its human counterpart? Absolutely, says Pedro La Hera, researcher at SLU. 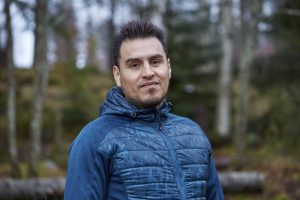 – Imagine that you start a new job, where you’re going to build something you have never built before. Either you can try things out on your own until you succeed, or you can let someone who already knows how, teach you. The latter is both the most time-efficient and the most common method people use to learn new skills, he explains and continues:

– This is exactly what we have had done in a study where an algorithm I have developed has taught a crane on a forwarder to perform tasks, with the help of data from human operators. That means using data that comes from machines that have been operated by humans, in real environments.

In robotics, this approach is known as “learning through demonstration”. It is simply a new machine learning method that helps robots learn new skills with the help of demonstrations. It is applied in situations where it is not possible to pre-program a robot, as it is on the factory floor for example, because it needs to be able to take decisions and perform more complex tasks in the real world – in this case in the forest.

The study, which Pedro La Hera has carried out in a simulated environment within Mistra Digital Forest, shows that this method is excellent at teaching a crane on a forwarder. And the result is both more accurate and faster than if a human had done it.

According to Pedro, the next step is experimental tests in order to validate the results.

– First, we plan to collect more data with the help of our industry partners. Then we will perform experimental tests in a test bed that we have developed and presented, together with Luleå University of Technology, as part of the newly started lab Arctic Off-Road Robotics Laboratory (AORO), he says and concludes:

– There are applications of similar methods in small to medium-sized robots, but no one has previously developed any for the heavy machinery industry, neither in forestry nor in other areas. We can be the first ones. This would show that automating work with heavy machinery can be done, something which up till now has not been considered possible.